The Second Studio (formerly The Midnight Charette) is an explicit podcast about design, architecture, and the everyday. Hosted by Architects David Lee and Marina Bourderonnet, it features different creative professionals in unscripted conversations that allow for thoughtful takes and personal discussions.

A variety of subjects are covered with honesty and humor: some episodes are interviews, while others are tips for fellow designers, reviews of buildings and other projects, or casual explorations of everyday life and design. The Second Studio is also available on iTunes, Spotify, and YouTube.

This week David and Marina are joined by Mike Ross, the Architectural Design Studio Executive at Walt Disney Imagineering, to discuss the design and construction of theme parks and theme park buildings, the Disney design process, technology’s impact on how they build, creating theme parks in other countries, and much more.

The Second Studio Podcast on The Architecture & Building Process 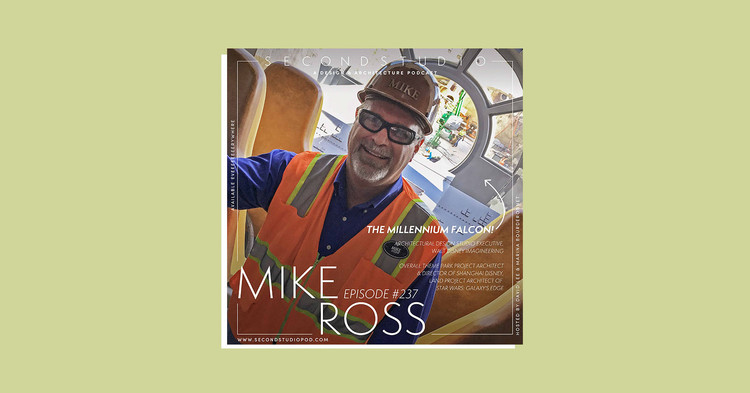 Mike discusses how he first became interested in architecture and working at Walt Disney Imagineering.(00:00)

The complexities of the jobs is absolutely amazing. We like to say that we take the most complex thing on the outside, like a hospital with all the systems and all the electrical, we take a building like that, then we run a roller coaster through it. The nature of the work was just so unbelievably exciting and the people I’m working with day in and day out, these are super smart, cutting-edge, rocket-science-type people. Once I got into it I never had any desire to do anything else. (01:40)

Mike explains what the Walt Disney Imagineering department is and how it works and recalls one his first projects, The Tower of Terror.(06:42)

[During the design of the Tower of Terror] we reached out to an elevator company and gave them the pitch and they were like, “There’s no way. There’s no way! You guys are describing this crazy rickety elevator that falls faster than if you jumped out of a building, so it’s actually being pulled down and then pulled up. Everything that we’ve tried not to do in the design of elevators for the last 100 years you guys want us to do. Thank you, but no thank you!” I mean, the size of the motors that we were talking about were huge. the only elevator motors of the size that we were going to need for this attraction were use in diamond mines in South Africa that go down a mile-and-a-half to mine diamonds. (13:40)

Mike talks about how theme park structures are designed to meet various building codes and working with building department officials.(25:17)

We engage with the building departments around the world really early. Once we’re kind of conceptually at the point where we know the project has legs and it’s going to take off, we bring the building officials in right away and start to have initial conversations with them. […] When you go into Hong Kong and Shanghai, these are new notions for those building officials, they’ve never run into these sorts of needs before. They haven’t put roller coasters through buildings. So we’ve actually partnered with them and brought building officials from those jurisdictions to the US and allowed them to talk with building from California, form Florida. (27:36)

Mike talks about working on Star Wars: Galaxy’s Edge and designing the two identical ‘lands’ to meet the more stringent building codes of the Florida and California.(31:17)

Mike discusses the heavy research they do to inform the designs of their structures.(37:26)

Mike discusses the construction materials and details of their more sculptural structures.(39:35)

One of our biggest quivers in our thematic package is plaster, themed plaster. We have a number of facility art directors who are absolute geniuses shown it comes to making plater look like just about any material you can think of. […] We developed a methodology for building rock work, we call it chips and tabs.

[… for example] This shape probably starts as a foam carve in our model shop. We build that up to a 1/2” scale and then we will scan that foam carving physical model in high-definition detail, bring that shape into a software package and do an offset for the thickness of plaster that the Art Directors think we need. And then we will set a lathe plane and rebar plane and whatever shape you get as you cut through that 3d model, it basically sends out individual slices at 6” or 8” on center and sends that profile to rebar bending machine that will automatically take a straight rebar, bend it to the shape necessary, tag it with an RFID tag, and then bundle it. (40:12)

Mike talks about technology how has changed their process and construction techniques and how their teams are formed.(44:37)

How much Western cuisine is the population [in Shanghai] going to expect? Are they expecting hamburgers and French fries or are they expecting dimsum? It’s a really interesting conundrum. We have market research teams to survey the public and we try to gain as much information as we can, but you kind of never really know for sure until you get the park open. Oddly enough, one of the things that was the most popular food in the entire park was turkey legs! There was a little turkey leg hut that was probably a couple hundred square feet, it was really meant to be fast food [stand], but people were waiting in line for like 3 hours to get turkey legs.” (57:33)

Tower of Terror is a complex attraction, but it’s nothing compared to complexity of the two attractions that make up Star Wars: Galaxy’s Edge. I mean, one attraction has a free ranging vehicles that moves into an elevation shaft, sits on to of an elevator platform that allows the vehicle to drop, but not only is the vehicle sitting on a moving elevator platform it’s sitting on top of a motion simulator base that’s moving the vehicle as the vehicle is dropping. So you have three different ride systems coming together just to make up one scene in the attraction. It’s a level of technology that beyond anything that we’ve tried recently at all. (01:23:15)

Mike summarizes the big difference between working as an Architect as Disney versus at conventional offices.(01:37:08)

Mike discusses the back of house architecture required for attractions. (01:39:45)